IBM today announced to the local market several key enhancements to its XIV® Storage System Gen3 including a new solid state drive (SSD) caching option that can increase system performance by up to three times, and a new Apple® iPhone® app that lets people monitor their XIV storage environment from virtually anywhere.

With SSD caching, the most frequently used data is stored on solid state memory placed between the system memory and hard drives. Because SSDs use no spinning disks and robotic arms, the storing and retrieving of data is accomplished with virtually no latency, speeding data access by orders of magnitude. In addition to the superior performance, SSD cache requires no separate tier to manage.

The IBM XIV SSD Caching option provides up to 6TB of fast-read SSD and is the latest in a string of advances that IBM has developed for the enterprise storage system over the last six months. In July, 2011, the company introduced the XIV Storage System Gen3, a new generation of the storage family that dramatically lowered the total cost of ownership and improved system performance by four times over the previous model.
With XIV Gen3, IBM also replaced the system’s Ethernet-based backplane with a high-performance InfiniBand backplane that increased the system’s internal bandwidth between modules by 40 times. Then in October 2011, IBM added 3TB disk drives to the system increasing system capacity by 50 percent.

IBM also announced the ability to mirror data between previous versions of XIV and XIV Gen3 systems, which will ease data migration and help give customers the flexibility to repurpose their XIV models as disaster recovery backup systems.

For more information on IBM XIV Storage System Gen3, please visit http://www-03.ibm.com/systems/storage/disk/xiv/
Posted by Bedalyn Aguas at 4:34:00 AM No comments:

The Simplified Account Opening (SAO) initiative is a priority project for the LANDBANK management that aims to simplify the actual account opening processes and reduce processing time by at least 50%.

“This will enable LANDBANK to become more responsive to our customers’ needs and will provide a more pleasant experience as account opening is normally the first interaction with the Bank,” said Alan Bornas, Senior Vice President and head of LANDBANK’s Technology Management Group.  “This project with IBM is also aligned with the Government Regulatory Requirements and is aimed at improving public governance through the automation and elimination of manual works,” Bornas added. 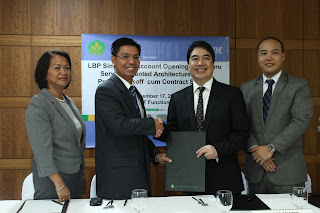 BPM could also assist banks realize faster returns on investment by leveraging a process-centric approach and gain timely insight into potentially fraudulent activities before they become problematic. Banks with BPM would be able to monitor and act on changing consumer trends.

By leveraging the reference architecture, LANDBANK will have the flexibility to integrate and grow its SOA/BPM progressively over a number of projects which is the recommended best practice.

The IBM-LANDBANK Simplified Account Opening contract was signed in November 2011 and will be completed in approximately 17 months.

For more information about IBM BPM, please visit http://www-01.ibm.com/software/info/bpm/what-is-bpm/
Posted by Bedalyn Aguas at 4:41:00 AM No comments: